In December 2011, Amazon introduced the Kindle Fire at a price of US$199. The Fire had a seven-inch full colour touch screen, WiFi and a cloud-accelerated web browser with access to movies, games, apps, music and books. The Fire looked to be competitive with Appleâ€™s iPad2, although the iPad2 had more functions, and sold at the time for US$499. How was it that Amazon could set a price that seemed so low?
According to CNN Money (2011), the answer lay in what was included in the machine and what was left out. Comparing the Fire with the iPad2, you can see that the cost (based on industry-standard parts) of the core components for the Fire was substantially lower: 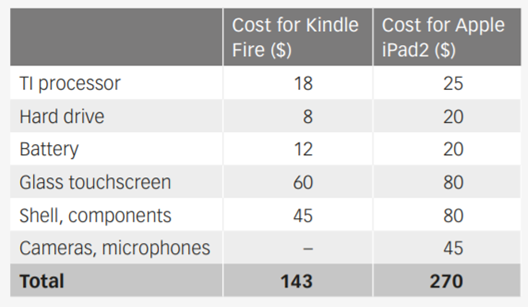 Across the board, lower componentry costs were achieved by installing a smaller hard drive, shifting memory functions to the cloud, and leaving out certain accessories altogether, such as cameras (the iPad2 had two of them). Even so, it is clear that the US$56 difference between cost and list price did not leave much to cover costs of assembly or other expenses, or for proâ€‘ ts, compared to the iPadâ€™s US$229.
Apple routinely reports its sales â€‘ gures, and claimed sales of around 11Â million iPads in the last quarter of 2011. Amazon, on the other hand, was reticent about releasing its sales â€‘ gures, but industry analysts estimated that 2 to 3Â million Kindle Fires were bought in the holiday quarter, making it the bestselling competitor to the iPad.
Over the past three years, the competitive positions of the iPad and Kindle have remained much the same. The two brands are direct competitors, albeit with different operating systems, and they have much the same capabilities, yet the iPad continues to sell at a price 50 per cent or more higher than Kindle Fire.
In the â€‘nal quarter of 2014, Apple sold 21.4Â  million iPads, or about 28 per cent market share, more than the next four tablet manufacturers combined. Only about 1.7Â million Kindle Fires were sold by Amazon, putting it in â€‘fth place with about 2.3 per cent market share.
One key difference between the Amazon and Apple strategies is that Amazon uses its e-book reader as a platform to sell other Amazon products, such as Amazon Prime and Kindle Books. In other words, the Kindle Fire can be sold at a lower price than its functionality might indicate because it gives Amazon a built-in means of capturing additional revenue from customers.

1. When a person buys a Kindle Fire, what are they really buying?

2. Can you think of other examples of â€˜captive pricingâ€™, where the ownership of a product leads to sales of supporting products or services?

3. How low do you think the price of the Kindle Fire can go?

4. Can you think of any competitive strategies that Apple might adopt in response to the Kindle Fire?

5. Do you feel the Amazon strategy has been effective?